October and November have flown by and now there is only a week left in Ulsan followed by four days in Seoul before we fly home. Our Korean experience will be over.

We’ve visited our co-teacher’s home town Andong and it’s UNESCO traditional village, Hahoe. We also went to a similar folk village in Gyeongju called Yangdong. Both were great places but Hahoe felt much more like a living relic of Korea’s past way of life. 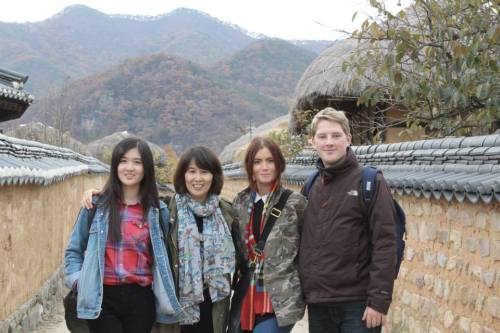 Yeong Sa, Emily, Charlotte and me

Photography wise my new Kiev 4a had a light leak so all the pictures came out crap! Devastated. It’s now taped up and hopefully the future photos will come out fine.

We also took a trip to Gyeongju with our director Mrs. An and our other co-teacher A Reum. We love Gyeongju and it’s a great place to visit in the autumn.

Mrs. An, me, Charlotte and A Reum.

It was also Halloween so we had a great party at our academy. The academy was decorated for halloween and the kids were allowed to bring in their friends so we played British Bulldog, UNO, Jenga and other games. It was fund just to have a good time with the students.

Heo Teacher went to town on his costume.

Unfortunately we’ve also said our final goodbyes to our friends. First it was Josie in July, then Sooz, Claire and now we’ve said goodbye to Amy and Bridget who left this weekend and we saw Paul, who’s staying for another 6 months, for the last time.