On the 22nd October Robert Capa would have been 100 years old.

The Guardian has  posted a recording of Capa discussing his best photo. In the 1947 radio interview he discloses how the shot was luck. You’ve got to make your own luck and through his bravery in being in the trenches during the Spanish Civil War he was there to exploit the one in a million shot.

Check out the International Centre of Photography’s Robert Capa celebration. 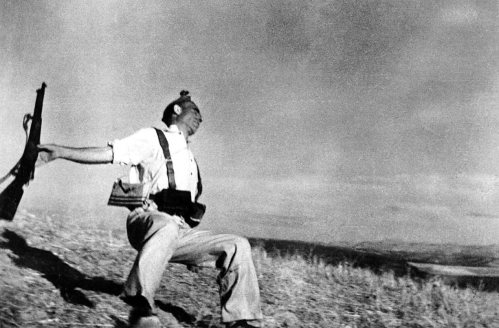 An great BBC documentary revealing the life of William Klein. The documentary shows Klein’s street and fashion photography as well as his film making. The documentary is also very personal. You can get a good grasp of who Klein is through watching Klein interact and from the interviews with collegues and friend.s

How to Use the Zenit E

The camera I have been learning with is the Zenit E. Check out reviews on I Still Shoot Film and Lomography.

When I first received it, it looked like a mass of incomprehensible dials. I have since learnt to love it. They’re great cameras and so cheap it doesn’t matter if it breaks or you bash it about. They’re built like a brick and as heavy as one (916g!).

I found this great, but not all encompassing guide, on a Lativan website. Here is the manual.

You can also determine the year your Zenit was made. Look at the serial number; the first two digits are the year and the third the month. For example mine starts 762 so it was made in the year 1976 and in February, the second month.

How I began to teach myself film photography

When I embarked on the idea of learning film photography I didn’t realise it would be so difficult to find materials. I thought you could simply google it and it would all be there. But, as I am finding more and more, there is so much crap on google that some times it’s difficult to cut the wheat from the chaff.

I bought two books but I found them of little use: one, Colins Complete Photography Manual and, two,  the 35mm Photographers Handbook.

The first thing I found useful was the I Still Shoot Photography beginners guide. With these guides I began to understand the relationship between ISO, aperture and shutter speed and, importantly, just what the hell these terms meant. Other terms I began to grasp was f/stop and depth of field.

I also learnt why I’d want a smaller f/stop for  a shallow depth of field. I simply remember it as the smaller the actual opening in your lens the sharper everything in the photo is (f/stop of 16 for example). And the bigger the opening in the lens the more blurred things are which you’re not focusing on (f/stop of 2.8 for example). You can use a smaller f/stop number (2 or 2.8) for portraits so that all the focus is on the person but a larger f/stop (16 or 11) for landscapes to get everything in the image sharp.

Following these tutorials I still felt like I needed it explained to me in person. I found these fantastic and entertaining tutorials on youtube:

I watched them up to around the 20th lesson and they helped so much. They really built on what I’d read on the I Still Shoot Photography beginners guide. I highly recommend the videos!

Lastly, I played around a lot with the CameraSim. This nifty tool lets you practise changing the ISO, aperture, shutter speed and even focal length and weather conditions.

The most important thing is to keep taking photos and practising what you’ve learnt. It took me a while, but, the first time things actually started to click was in a Beijing market. I found I knew what all the terms meant and what I was supposed to do but actually putting that into practice on the moment I found difficult.

Why I’m shooting with film

When I decided I wanted to get into photography I bought a Zenit E (SLR): fully manual, made in the USSR in 1976.

So, why didn’t I go pick up a Canon or Nikon DSLR?

Fistly, you can pick up an old soviet camera’s dirt cheap on eBay rather than shelling out on a decent DSLR. Then pick up some film and your off; and only 40 quid out of pocket.

Secondly, I wanted a manual camera because I wanted to learn photography. I didn’t want to lazily put my Canon D600 in auto and fire away. I wanted to learn what the hell aperture really is, what ISO actually means and to understand shutter speed. Not being able to simply switch my camera to aperture priority mode meant that I have to understand the relationship between aperture, ISO and shutter speed.

I didn’t find it easy. It was surprisingly difficult to get my brain to understand that if the aperture F-stop number is getting smaller then the iris is opening bigger.

With a DSLR you can just blast away in auto like it were an AK-47. On the other hand, with a fully manual camera you’ve got to actually think about what depth of field you want, what your focusing on and whether what your about to photograph is even interesting. When I do go digital I can take these hard earned lessons with me and hopefully I will be a better photographer for it.

Thirdly, because I think photographs are getting hidden away in badly labelled files on your laptop or lost to the ever increasing depths of Facebook. I want to physically hold a tangible copy of my photography.

Lastly, I wanted just one of my technological tools not to be instant. Everything we have gets us the result instantaneously. But with a film camera you can look at the rear LCD screen to check if you got the shot you wanted you’ve got to wait until all 36 shots have been taken, the (precariously) unload the film and wait 5 days for the film to be developed. It’s nice to be in a rush or get the result straight away.

These are my reasons for choosing film photography.

Here is a good video explaining some more reasons for choosing a manual camera to learn with:

Why I’ve taken up photography.

I’ve always had an interest in photography but I’ve really been given the imperative to actually take the time to sit down, teach myself and take it up as a hobby.

Firstly, I saw some amazing travelling photographs from friends on Facebook. This made me realise that I want to be able to capture the most exciting, hilarious and wonderful moments of Charlotte and my travels at the beginning of 2014.

Secondly, I have been following the incredible work being done one the International Brigade Memorial Trust‘s Facebook page. There people have been digging up old portraits of volunteers and putting names to faces (view some here). Although they must have known what they were doing was spectacularly brave and that split moment (I don’t think) they would have realised in 70 years people would be gazing at them in wonder and desperately trying to put a name to their face just to try and preserve their heroism for the future.

It’s this idea that when we take a photograph we can’t imagine, at that moment, why in 30, 70 or one hundred years would think it’s interesting. Whether it’s seeing the fashion of the time, the now archaic utensils in the background or even the former packaging of the brands we love today; the subject and the background can all provide something curious to look at. Taking candid, real life photographs documenting the life of ordinary people is what really interests me.

So, these are the reasons why I’ve taken up photography and later I’ll post how I’ve been learning.